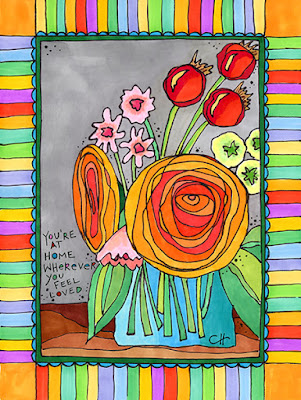 I've already written about my dear friends, Kristi and Johnanna, in December and today I want to tell you about their parents.

When I think about my childhood memories, a good deal of them land in the Linney household or on vacation with them.

They opened their home to the friends of their children and I treated their home as my own. I always just walked on in, not bothering with a knock yelling out my hellos. They lived in a big Victorian home right next to the train tracks and when I hear the train today, it reminds me of my childhood and the gentle shake that would happen as the train passed at night.

There were endless sleepovers and holidays and sitting around the butcher block table snacking and warming our back side by the gas heater until we were scorched.

I remember making myself butter and honey on bread and drinking out of the water jug like I was one of theirs. It was around that butcher block table that this picky eater first ate guacamole!

Mrs. Linney had one of those big station wagons with the seat in the back and I remember traveling to Port Aransas to the beach with them- laughing all the way. The Linney's gave me a place in their home and I wanted to really honor how special they are to me. I was at home in their house and I always felt loved.

As I may have told you before, I grew up in a small town where you go to kindergarten with the same people you graduate high school with and not only are you friends with your classmates, you're friends with all of their siblings, too.

Week 12 of Give 52 went to my dear friend, DeDe Reese. This week I honor her mother, Susan. Who at a time was like a second mother to me.

I miss the days when we gathered in her home and chatted about the boy de jour and current events around town but I will always cherish the wisdom she imprinted on my life. And, though I'm more on the Hulk/Medusa side of mothering my boys, I'm working on the sideways glance.

Much love to you lovely, lady! You have truly blessed me.

Most weeks I know who I'm going to send the next week's artwork out to but sometimes I don't. In those not knowing times, I try to listen to what's going on around me.

Week 40 was one of those weeks.

Leading up to week 40, I kept hearing an echo of former First Lady, Laura Bush.

She was in the headlines regarding the current election cycle.

A link came up of an interview that she did with her daughter, Barbara Bush and it was really sweet and interesting. It starts out with memory of Barbara's that Mrs. Bush didn't learn to type because she wasn't going to be somebodies secretary. A woman with a plan.

Then I saw that she and her other daughter, Jenna had co-written a children's book together called, Our Great Big Backyard.

And this kept going on- Ellen sent some cutie pie to the White House and the video popped up somewhere; and her book Spoken from the Heart showed up in my Amazon feed; and the last thing that happened was I sitting on the couch starting this weeks drawing with no idea who it was going to and my son, Drew, put a show on the soul-sucker (you may call it the television in your house). It was ESPNs 30 for 30 Shorts: First Pitch. A show about how we, as Americans, went on after 9/11 and the importance of our rituals. In this case: baseball.

And, there she was again.

Our graceful, beautiful, soft-spoken and steadfast former First Lady, Laura Bush. And when the universe keeps sending me an echo, I listen because I want the universe to work in my favor. What I admire about Mrs. Bush is that she is cool, calm and collected- a quiet voice but a stern, intelligent, loyal character radiates from her as well. She is a champion for women's causes and I hope that in my everyday life I can lead by her example.

None of us will. Forget.

No voy a olvidar is Spanish for I won't forget. (And if the translation is incorrect and you know it, just let me keep believing it is correct. Muchos gracias!)

What is it that we won't forget? The love and sacrifice that our mothers have made for us.

Week 39 was sent out to my mom in honor of Mother's Day. And I won't forget the many things that I love about her and the many things she has done for me over the years.

I won't forget when I was small we would curl up on the couch together because I wanted to be close to her.

I won't forget the bond she has forged with her sisters and the many family vacations we have had together. They brought my childhood so much fun.

I won't forget how independent and giving she is, rarely asking for help or for anything in return.

I won't forget the picture I have of her in my mind, dancing in our living room, smiling while eating what I think was a cup of ice cream (or some other kind of desert).

And so much more!

No voy a olvidar. I won't forget.

This is my gift. I give it to you.
Posted by Cheryl Houston at 5:00 AM No comments: